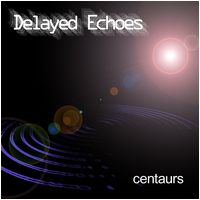 Centaurs was released on November 6th 2009.

Delayed Echoes‘ music is already moving towards a more classic definition of ambient. The second album, Centaurs, is coming up quickly and is definitely more ambient and much darker than Emission. At first, it was designed to be dark and oppressive, as a cave. The third track I worked on was the darkest of all. It was creepy. Then, it became brighter and changed the theme of the album from a dark cave to space. Space is also dark and the void can be just as oppressive as a cave but there is also light.­

Centaurs are planetoids that have an orbit between Jupiter and Neptune. Their nature, behavior and environment crossed with references to Greek mytholgy provided inspiration for this album.

Please take the time to leave a comment here or in a private message.  It’s really appreciated.